In this blog, we explain the difference between thin film solar cells and traditional designs. Next, we explore why advances in thin film thermal metrology can play a valuable role in the continuing push for more efficient, flexible solar energy generation technologies.

What are thin film solar cells?

Thin film solar cells are a “second-generation” solar panel design which are manufactured by depositing thin films of photovoltaic semiconductor material onto a substrate made from plastic, glass, or metal. These thin films are made using a variety of materials with strong light absorption properties, including:

Thin film solar cells are distinct from the most widespread solar generation technology, cells based on crystalline silicon (c-Si) modules. The light-reactive material layer in a prototypical thin film solar cell is one micron thick (about 1/350 the thickness of  the same layer in traditional solar cells). Both types of design work by harnessing the photovoltaic effect: radiation from the sun excites electrons in the reactive material, generating a current through a connected electrical circuit. A prototypical cell design utilizes two layers of different semiconductor material (an electron-rich, negatively charged n-type layer and a hole-rich, positively charged p-type layer) to induce an electric field capable of driving the connected circuit.

What are the advantages of thin film solar cells?

The reduced physical footprint of thin film solar cells makes them a promising choice for architecturally-integrated photovoltaic solutions (like solar roof tiles and windows) where size and weight are at a premium. Because they can be made to be flexible, thin-film cells can also conform to the curved surfaces of vehicles, such as the rooftops of buses, RVs, and boats/ferries. The reduced weight of thin film designs also allows for added portability, and thin films are incorporated into a wide variety of portable generation solutions like foldable panels. Anyone who has used a solar-powered calculator has taken advantage of a thin-film solar cell!

Notably, thin film cells continue to see steady improvement in overall efficiency, a trend that appears to have accelerated over the past decade (see figure below). To achieve cost-parity with c-Si designs across a broader array of applications, thin film manufacturers will need to continue improving photovoltaic efficiency while bringing down manufacturing costs. Thin films exhibit different properties compared to bulk counterparts, and a deeper understanding of these materials will be critical to successfully meeting these imperatives. In particular, the reduced thicknesses of thin film solar cell materials that are on the order of the electron and phonon mean free paths lead to reductions in thermal conductivity and increased thermal resistances at interfaces (we explain this challenge in greater depth in our blog here).  This leads to deleterious temperature rises in thin film solar cells, which reduces the amount of current able to be drawn from the photovoltaic process and thus reduces device efficiency.

Clearly, knowledge of the thermal properties of the materials that comprise thin film solar cells are critical to material and device design to ensure maximal photovoltaic efficiency. In the next section, we explore how new developments in thin film thermal metrology can help. 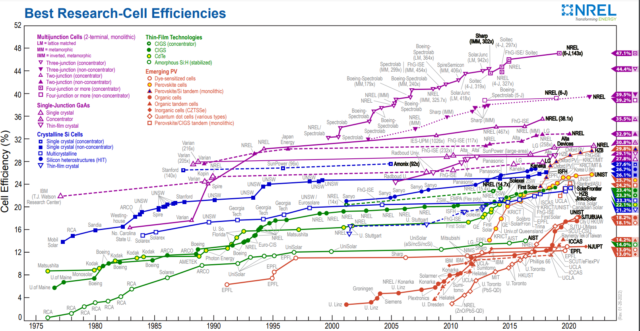 In short, thin film materials are simply too thin to rely on traditional thermal measurement techniques.  The thermal conductivity of thin films is strongly dependent on the film thickness and processing conditions, meaning one cannot simply “look up” the thermal conductivity of thin films in the back of a textbook. Understanding these properties, however, is crucial to continuing to understand and refine the thin film materials used in applications such as solar panels, and electronic devices.

For thicker semiconductor materials, sensors such as thermocouples or resistive thermometers can accurately measure the temperature gradients or changing heat flux that results as heat is applied to a material (and then related to thermal conductivity via Fourier’s law or the heat equation). Thin film materials, however, are often thinner than the heaters and sensors used to induce temperature gradients and capture temperature changes, respectively. The accurate measurement of thermal resistance and thermal conductivity of thin films requires a different approach to thermal metrology, which must achieve the substantially higher temporal/spatial resolutions demanded by thin film semiconductors.

Optical measurement techniques provide a solution. For example, Laser Thermal’s products and testing services are anchored in Steady-State Thermoreflectance in Fiber Optics (SSTR-F), a non-contact, laser-based pump-probe technique. This approach works by utilizing a laser to create a nano-to-microscale heating event on the surface of a sample, resulting in a steady-state temperature gradient in the sample. A secondary probe laser is then used to measure the temperature on the surface of the sample, which is driven by different steady-state temperature gradients established by varying pump powers. The spot laser used in this process can be tuned to be as small as a few microns in diameter, which, given the nanoscale localized absorption of the laser, enables SSTR-F to be used effectively to measure in-plane and through-plane (cross-plane) thermal resistances—even for nanometer-scale thin films and atomically thin interfaces.

If you’re interested in seeing this technique in action, our video playlist here provides demonstrations of several relevant applications, including measuring the thermal conductivity of thin films. Or, if you have more specific questions, please reach out to our team using the button below.

As Co-Founder and CEO of Laser Thermal, John has conducted research characterizing the mechanical, optical and thermal properties of materials for almost two decades. John received his Ph.D. in Mechanical and Aerospace Engineering from the University of Virginia in 2013.  His work developed methodologies for testing the size dependent properties in thin film structures.  After his Ph.D. John joined Patrick Hopkins’ group extending his Ph.D. work focused on mechanical property characterization to optical and thermal properties. John is leading Laser Thermal’s development of SSTR-F to provide accessible small-scale thermal conductivity measurements to industrial and academic partners.