Thermal conductivity is a form of heat transfer with vital implications for material performance in applications ranging from electronic devices, to manufacturing, to transportation, to even the design of coffee cups.

In this blog, we explain what thermal conductivity is, and what differentiates it from other forms of heat transfer. Accurately measuring thermal conductivity requires an array of different processes, depending on the material being assessed. We conclude with a look at one example of an advanced conductivity measurement technique – Steady State Thermoreflectance (SSTR) – which can measure bulk materials to films as thin as a few nanometers.

Thermal conductivity is defined as the quantity that relates the heat flux through the material, Q, to the temperature gradient that is established across the material, dT/dx:

This equation, known as “The Fourier Law”, predicts the temperature difference across some thickness of material in steady state conditions (when the temperature is not varying in time).  So, if you want to make sure your hand does not get too hot when you are holding your cup of coffee, you can either:

In the International System of Units, thermal conductivity is expressed using W/m*K (Watts per meter-Kelvin). It is one of three ways that heat can transfer through a substance. We concisely explain the difference between each one below.

The rate at which heat is conducted depends on the properties of the material in question. This rate can vary immensely (a highly conductive substance like copper conducts almost 10,000x more heat than air). Measuring thermal conductivity is essential to determining heat transfer rates and temperatures under different conditions.

How is thermal conductivity measured?

The different methods used to test conductivity for various different materials can be broadly grouped into two categories:

Most traditional thermal conductivity measurement techniques use heat sources or sensors (thermometers) that are often orders of magnitude larger than the thickness of the films that are ubiquitous in modern micro- and nanotechnologies.  This means that the volume of material being measured using these techniques is much greater than the film of interest and, thus, the temperatures and temperature gradients being measured are dominated by everything but the thin film.  Consequently, these techniques are not suitable to accurately measure the thermal conductivity of thin film materials.

As a result, only selected techniques with heaters and/or sensors that are designed with temporal and/or spatial resolutions that can capture the thin film temperature gradients are suitable for measuring thin film thermal conductivity. This is typically achieved using advanced metal patterning or focused laser systems.

Through the use of a patented1 fiber-optic design, SSTR-F uses a laser to create a heating event on the surface of a sample, which results in a steady-state temperature gradient that is established under the sample surface.  A secondary probe laser then measures the temperature on the surface of the sample resulting from different steady state temperature gradients that are established from different pump powers.  Returning to Fourier’s Law, the heating event provides the “Q,” and the probe laser measures differences in dT/dx based on different “Q’s” in steady state.  With these two properties, SSTR-F measures thermal conductivity.  The key in this thin film metrology is that the laser spot size can be tuned to be as small as a few microns 1/e^2 diameter, resulting in the ability to measure the thermal conductivity of even extremely thin films.

SSTR-F can rapidly detect variation in thermal conductivity that occurs due to defects, stresses, or compositional inconsistencies. This approach is able to achieve:

If you’re interested in seeing an example of the sort of results that SSTR-F can produce, please see our validated sample results here.

Or, if you are interested in learning more about SSTR-F, the Laser Thermal team is happy to chat about how we can help solve your measurement challenges. 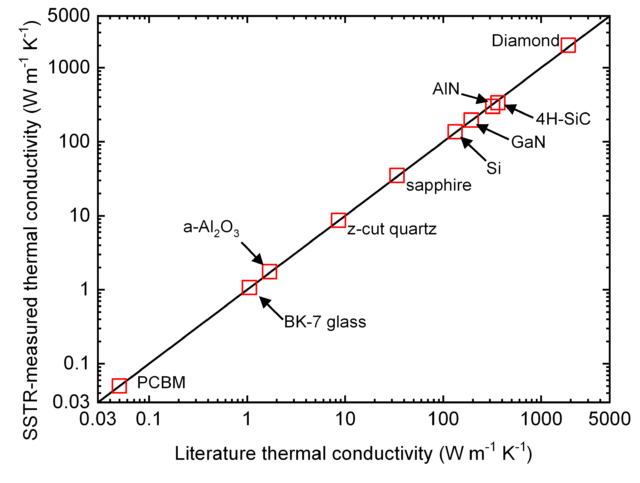 As Co-Founder and CEO of Laser Thermal, John has conducted research characterizing the mechanical, optical and thermal properties of materials for almost two decades. John received his Ph.D. in Mechanical and Aerospace Engineering from the University of Virginia in 2013.  His work developed methodologies for testing the size dependent properties in thin film structures.  After his Ph.D. John joined Patrick Hopkins’ group extending his Ph.D. work focused on mechanical property characterization to optical and thermal properties. John is leading Laser Thermal’s development of SSTR-F to provide accessible small-scale thermal conductivity measurements to industrial and academic partners.

next
Why Your Semiconductor Testing Process Must Employ Thermal Resistance Measurements